“Women do not covet sexual victimization. Cancel all advertising until such time as the ‘Post’ exhibits a more rape-adverse moral compass, adopting a more realistic and law abiding approach to the topic of rape and apologizes to all rape survivors for it’s cavalier attitude toward their pain and suffering.” The RINJ Foundation

(06/11/2014) – In a post to the Washington Post’s FacebookPage The RINJ Foundation declared that “it’s time now to cope with the leadership of rape culture”.

Setting out some background The RINJ Foundation’s post explained some of the reasons for its collective anger at the news paper which it describes as a ‘beacon to the world’.

“Around the world our volunteers are taking kids out of hanging trees; begging for surgery for dozens of scorched and tortured rape victims; counseling broken women; and trying to end the 1 million-kids-per year blossoming child sex trade.

“We have thousands of young, energetic, active supporters all around the world.

They will soon be briefed about a new mission in the USA where a global beacon, a newspaper, is being hijacked by certain of it’s ‘neo-con’ writers to promote a systemic misogyny that bolsters the hopes of rapists (for a carte blanche on their crime) and brings fear to women and children.

“The RINJ Foundation has NGO workers in Syria (http://rinj.org/interactive/?page_id=476) trying to gather evidence for war crimes tribunals meanwhile in North America, in the NWO Capitol, rape is being promoted with cavalier disregard.”

Bringing home the timing of recent disparaging remarks made by Washington Post columnist George Will against campus rape survivors, the Foundation’s post reminded readers of a scandalous rape of two children in India.

“As we urge men in northern India not to rape and take two raped and murdered kids down from a mango tree, The Washington Post adduces bafflegab about women coveting the status of ‘victimhood’ [sic].”

The RINJ Foundation has been very effective in the past with its boycotts and yesterday announced a Boycott of the Washington Post (http://RINJ.org/511/) encouraging advertisers to pull their ads.

“Just like we did with Facebook three years ago,” the posting reads, “until it dropped its rape pages and attached $millions in ad revenues, we’ll badger WP advertisers until they start pulling ads and shifting their campaigns to other papers and media. (http://en.wikipedia.org/wiki/Criticism_of_Facebook...)”

“Safety for women and children in all settings, in all parts of this world must live up to its promise,” the RINJ post goes on.

“We urge our corporate friends to cancel all advertising in the Washington Postuntil such time as the ‘Post’ exhibits a more rape-adverse moral compass, adopting a more realistic and law abiding approach to the topic of rape and apologizes to all rape survivors for it’s cavalier attitude toward their pain and suffering.” 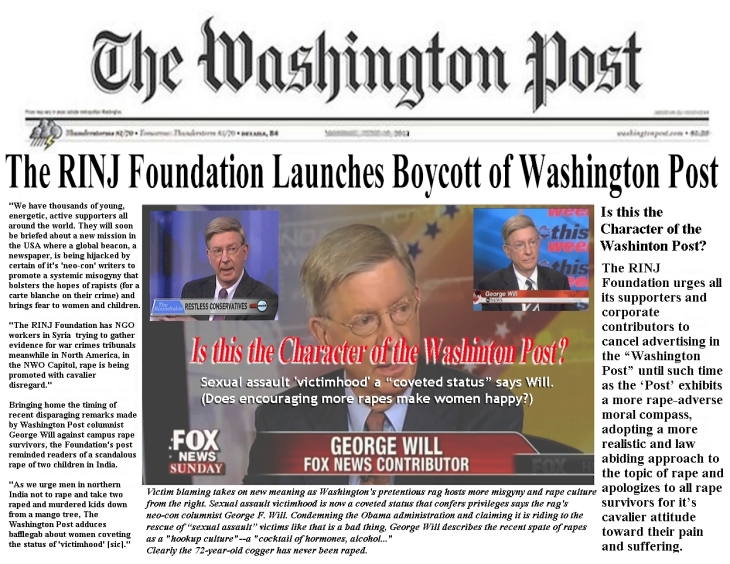 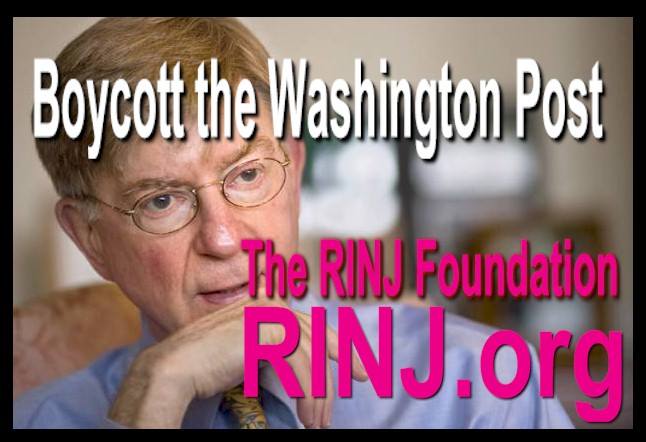