If you have a sexual assault emergency go immediately to: Rape Emergency Information 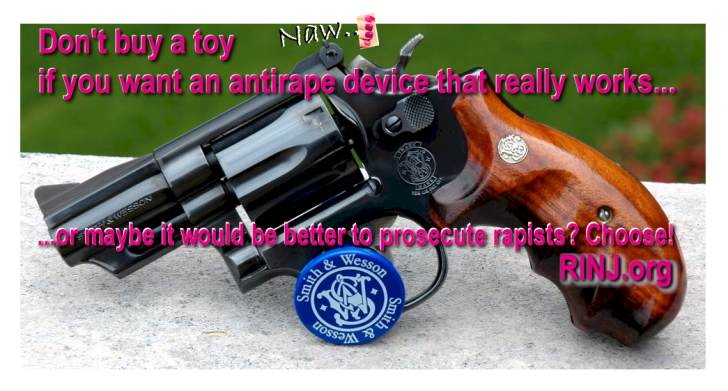 The makers of these anti-rape novelties assume that men need to rape; the patriarchal governments don’t want to make laws to prosecute rapists and put them in jail; and that society is entitled to its pervasive rape culture (OMG look at Canada’s raped and missing aboriginal women issue. Fix THAT please!).

There is a backlog of rape kits untested and a cold case list that has as many fugitives as there are galaxies in Laniakea. The patriarchy that runs companies and governments wants women to buy novelty “rape detectors” instead of working toward a functional society that prosecutes criminals and puts them in jail? It’s a bad concept.

And don’t forget, the next level of undetectable rape drugs responding to these novelty detectors will likely kill many people on first consumption!

It’s not a matter of being against anti-rape underwear or the like, its about the inalienable right to safety of the person. To say women should carry these anti-rape devices is like saying ‘wear body armour because you are not safe’.

At some point crime rules, law, order and society fails. Throughout history there is a certain point where government let crime rule the streets and the people said “f*ck it!” I am taking the law into my own hands’.

Look what’s happening in India? Do you think stupid nail polish helps? Communities are mobbing up and hanging alleged rapists and their buddies. The backlash against the ant-rape novelties men want to sell to women is similar. The crime has become so pervasive that rape is no longer a joke. Anti-rape nail polish is a joke.

The thousands of raped women in Mosul and Takrit don’t want your toys. They want safety.

To proffer that “woman, you are going to be raped unless you have this device” is to move society in the wrong direction. That is why there is such a massive global opposition to anti-rape fingernail polish, antirape under pants, rape-detector key fobs and all these other Crowdfunding episodes that exploit women’s fears.. To be fair, the testers for rape drugs create a false sense of security. It’s a nice feeling I suppose, but they absolutely don’t work.

The warped psychology of creating a cat and mouse game where women buy gadgets to detect narcotics and pharmaceuticals and men concoct non-detectables to dupe their prey is beyond understanding for the level of intellect that creates these money-making schemes.

It’s not a matter of ‘teaching rapists not to rape’ either, how about spending money on testing the backlog of thousands of rape kits in the evidence locker or prosecuting rapists? What about finding Canada’s raped and missing women? How about India’s missing girls (Is it 60 million?)

To these men with their money-making schemes we women of The RINJ Foundation say: If you really believe–really and truly believe– you need to sell women anything for rape protection, ‘man up’ and sell women Smith & Wesson model 19s, not silly toys and gadgets.

(Personal aside: The next man who tried to rape me, or drug me, would have a hole in him the size of a hub cap. Now there’s an anti-rape device. Spread the word. So if you really want to sell some anti-rape shit, sell .357 calibre. That shit works. So, do you get the point, you guys reading this?)

Store owners, go get some anti-rape finger nail polish and put it beside your pet rock display.

If rapists were jailed…